Lauretta is tired of her ratty, old wheelchair.
Finally, one day after school, Lauretta’s mother surprises her by taking her to buy a new wheelchair! But she isn’t satisfied with a regular 5- or 10- or even a 15-speed model… they are all much too slow. Nothing will do but the 92-speed, black, silver and red, dirt-bike wheelchair!

When Lauretta gets a speeding ticket during her one-day tryout of the super wheels, her parents insist that the wheelchair must go back…until her older brother has an accident and only one person can whisk him to the hospital on time – Lauretta, in her amazing wheelchair!

In 1987, Robert Munsch was telling stories in Calgary and a kid named Grant said that he liked bicycles, so he made up a bicycle story. In the story, Grant bought a bicycle that was so fast that he ended up getting a speeding ticket. It turned out to be a good story that could be used for anything that had wheels and some things that did not, like pogo sticks and skis. It also worked for wheelchairs, and he began using it whenever there was a kid in the audience who had a wheelchair.

Ten years later, a girl named Lauretta wrote and asked for a story about a girl who walks with crutches and uses a wheelchair. Lauretta was born with spina bifida and hydrocephalus and scoliosis and used crutches for short distances and a wheelchair for longer trips. Munsch sent Lauretta a copy of the story and decided that he needed a wheelchair book.

But now there was a problem. What about Grant? Munsch wrote to tell him that he wanted to change the bicycle story into a story for a kid who used a wheelchair. By then Grant was 20 years old, and he said that it was OK. 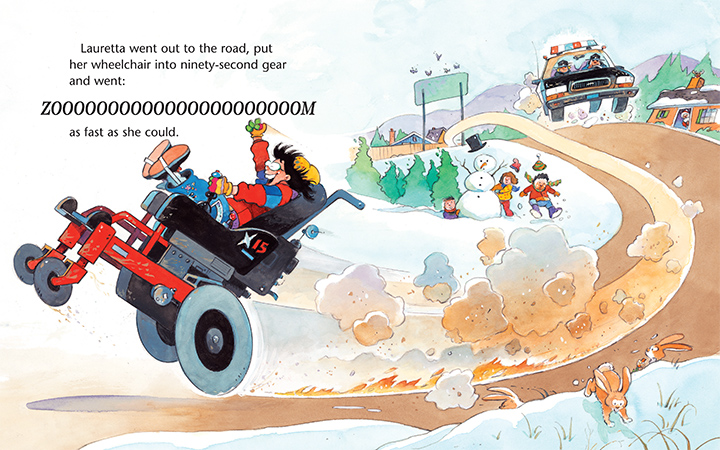