It's the first day of kindergarten and Amanda and Jeremiah have a problem. They both want to read the same books. They want to paint with the same paints. And they refuse to share.
The teacher tells them, "Look. This is kindergarten. In kindergarten we share. We share everything."
Everything? Amanda and Jeremiah decide to take their teacher at her word. But what can they share? They begin by switching their shoes, and end up wearing each other's outfits! Now Jeremiah is wearing Amanda's pink shoes, pants and shirt and Amanda is wearing Jeremiah's clothes. Together they show their teacher that sharing really can be fun!

In 1998, Robert Munsch visited a kindergarten class in Pontiac, Michigan. This kindergarten class had an interesting problem — a boy named Jeremiah. Jeremiah's shoes were too big for his feet, so he started every day at kindergarten by switching shoes with someone else. He did not tell the other person that he was switching shoes. Jeremiah just walked around the room until he found some shoes to switch with. This caused lots of fights about shoes, but it gave Munsch the idea for a story about a kid who switched shoes, and this quickly changed to a story about a kid who switched everything!

Amanda got to be in the story because Munsch was staying with her family while he visited the school. She was really happy to be in the book, but she wanted to make it clear that she and Jeremiah never really switched their clothes. They only switched shoes — and that was all his idea! 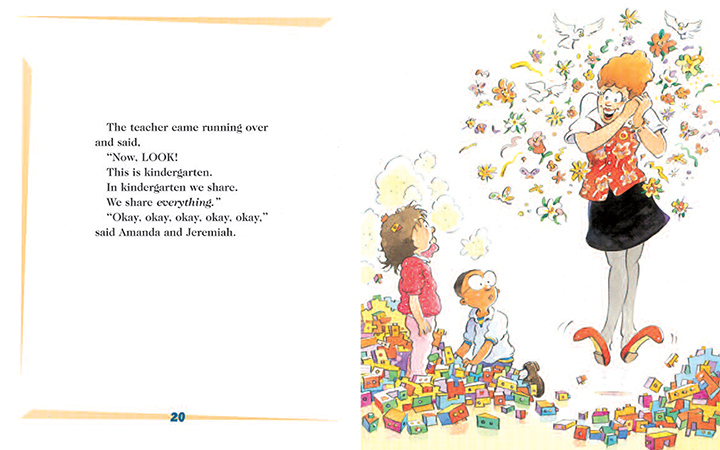