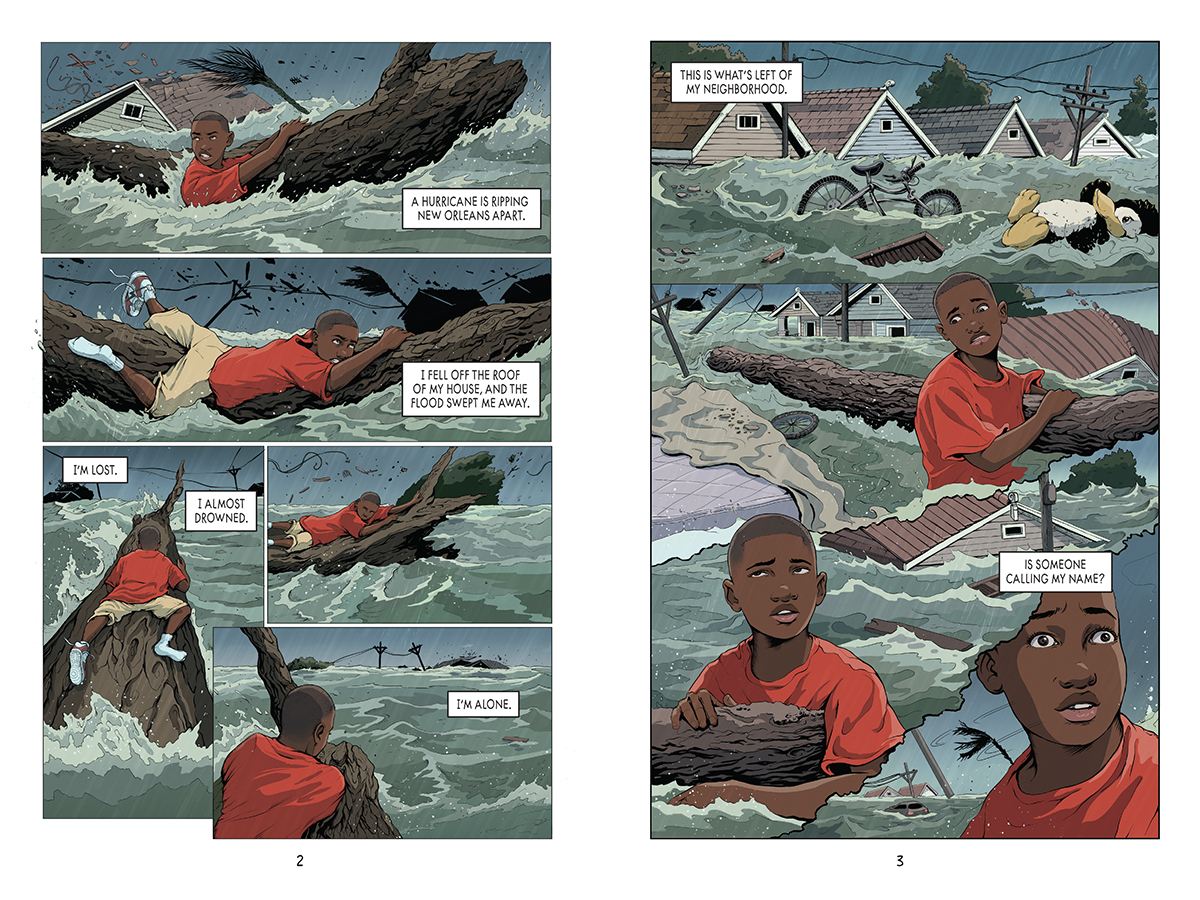 The story of a boy, a dog, and the storm of the century is brought vividly to life in this graphic novel adaptation of Lauren Tarshis's bestselling I Survived Hurricane Katrina, 2005, with text adapted by Georgia Ball.

Barry's family tries to evacuate before Hurricane Katrina hits their home in New Orleans. But when his little sister gets terribly sick, they're forced to stay home and wait out the storm.

At first, Katrina doesn't seem to be as bad as predicted. But overnight the levees break, and Barry's world is literally torn apart. He's swept off by the floodwaters, away from his family. Can he survive the storm of the century — alone?

Lauren Tarshis's New York Times bestselling I Survived series comes to vivid life in graphic novel editions. Perfect for readers who prefer the graphic novel format, or for existing fans of the I Survived chapter book series, these graphic novels combine historical facts with high-action storytelling that's sure to keep any reader turning the pages. Includes a nonfiction section at the back with facts and photos about the real-life event.

Praise for I Survived the Sinking of the Titanic, 1912 (I Survived Graphic Novel #1):

"The first installment of Tarshis' sprawling prose disaster oeuvre for young readers is reimagined in visually interesting full-color comic panels that support its recognizable thrilling pace and convenient twists. Many of the most exciting scenes are largely wordless, spotlighting the propulsive action amid growing tensions. A fresh and interesting adaptation, making for an easy crowd pleaser." -- Kirkus Reviews

Praise for I Survived the Nazi Invasion, 1944 (I Survived Graphic Novel #3):

“A crowd pleaser … Those familiar with this installment will anticipate the traumas and triumphs of the story, while newcomers to the series will also be pulled in; all will be satisfied with the mostly happy resolution … Another effective comics translation in this first-rate series.” -- School Library Journal

Praise for I Survived Hurricane Katrina, 2005:

"Expressive illustrations capture the drama of the storm and its aftermath, but the book's real power comes from its exploration of what it means to be a hero." -- Booklist

"Tarshis serves up another gripping adventure... with the light-speed pacing and death-defying maneuvering fans have come to expect." -- Booklist

Praise for I Survived the Shark Attacks of 1916:

"A gripping story that will hold the interest of reluctant readers." -- School Library Journal

Praise for I Survived the Sinking of the Titanic, 1912: