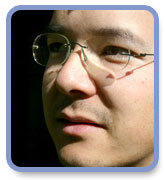 Shaun Tan grew up in the northern suburbs of Perth, Western Australia. In school he became known as the "good drawer." He graduated from the University of WA in 1995 with joint honors in Fine Arts and English Literature, and currently works full time as a freelance artist and author, concentrating mostly on writing and illustrating picture books.

Shaun began drawing and painting images for science fiction and horror stories in small-press magazines as a teenager, and has since then he has received numerous awards for his picture books, including the CBCA (Children's Book Council of Australia) Picture Book of the Year Award for The Rabbits with John Marsden. In 2001 Shaun was named Best Artist at the World Fantasy Awards in Montreal. He has recently worked for Blue Sky Studios and Pixar, providing concept artwork for forthcoming films.

One of his latest projects is The Arrival, a wordless graphic novel that tells its story through the use of mesmerizing images. "In researching a variety of other migrant stories," says Tan, "beginning with post-war Australia and then broadening out to periods of mass-migration to the US around 1900, it was the day to day details that seemed most telling and suggested some common, universal human experiences. I was reminded that migration is a fundamental part of human history, both in the distant and recent past."

"In seeking to re-imagine such circumstances (of which I have no first-hand experience), states Tan, "my original idea for a fairly conventional picture book developed into a quite different kind of structure. It seemed that a longer, more fragmented visual sequence without any words would best captured a certain feeling of uncertainty and discovery I absorbed from my research. I was also struck with the idea of borrowing the ‘language' of old pictorial archives and family photo albums I'd been looking at, which have both a documentary clarity and an enigmatic, sepia-toned silence."