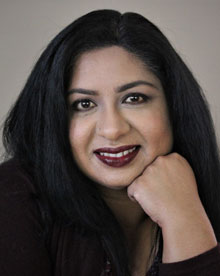 Sabina Khan writes about Muslim teens who straddle cultures. She was born in Germany, spent her teens in Bangladesh and lived in Macao, Illinois and Texas before settling in British Columba with her husband and two daughters.

Sabina is an educational consultant helping young people with academic and personal challenges. She started writing because she couldn’t find stories with characters who looked like her daughters or her students. She discovered that while Canada has a very diverse population, in schools, students are required to read the same books that have been in the curriculum for decades. “There is not much to engage them since they never see themselves reflected in the books they read,” she says. Her mission became to write books, both fantasy and contemporary, where the young people around her could see themselves as heroes overcoming obstacles to find love and happiness.

In The Love and Lies of Rukhsana Ali, Rukhsana lives in two different worlds that are often at odds with each other. Being Muslim, South Asian and American, she already exists at the intersection of three identities. Being gay as well puts her in conflict with her own family and religious community. The book deftly intertwines complex topics such as sexuality, traditions and culture with the basic human need of wanting to be understood and loved for who you are.

Sabina is passionate about creating awareness around LGBTQIA+ issues and for representation of all peoples in literature. She has spoken at events across North America including TeenBookCon, the Montreal YA Festival and the ABA Winter Institute. Her latest book is Meet Me in Mumbai. Visit her at: www.sabina-khan.com.

Can you tell me a little bit about yourself, personally and as a writer?

I’m a Muslim immigrant from Bangladesh and the mother of two amazing daughters who make me want to be the best role model every day. I’m also an educational consultant, so I work with young people helping them with academic and sometimes personal challenges. I started writing because I couldn’t find stories that had characters that looked like my girls and many of my students. As you know, here in Canada we have a very diverse population, yet in schools they are required to read the same books that have been in the curriculum for several decades. There is not much to engage them since they never see themselves reflected in the books they read. I wanted to write books, both fantasy and contemporary, where they could see themselves as the heroes and as the ones overcoming obstacles and finding love and happiness.

How did The Love and Lies of Rukhsana Ali come to be? What was your inspiration? Why was this the story you wanted to (or needed to) tell?

When my younger daughter was 17, she came out to us as bisexual. We’ve always encouraged open dialogue in our family because we want our daughters to know that our love for them is unconditional and that we accept them as their true selves, whatever that may be. My husband and I both defied our families and religious communities to get married, so we know firsthand the struggle and pain of being rejected by the ones who are supposed to love you no matter what. So, in our conversations we often talked about other teens who came out to their conservative families and did not get the support they needed. Some even contemplated suicide, while others just suffered in silence. I wanted to write a book that would tackle this issue that plagues many communities. But as a South Asian Muslim, I wanted to highlight what is happening in my own community and how difficult it is for teens to navigate these troubled years.

What makes this book special? Who do you hope will read it? What do you hope readers will take from it?

I think what makes this book special is that anyone who has ever felt othered or excluded or made to feel less than can relate to the character and the troubles she’s having. And especially because there aren’t many books out there that are tackling this specific issue. But even if you’re not a Bangladeshi-American gay Muslim teen, if you’re a teen anywhere from a conservative family, you can relate to the struggles that Rukhsana faces. Because being rejected by those who are supposed to love you unconditionally hurts no matter where you come from. I hope marginalized teens read it and find some hope in the way Rukhsana stays true to herself in the face of blatant homophobia. I hope teens who are not marginalized read it and can gain insight into what some people struggle with. I hope parents read it and understand how much children are affected when they are rejected and misunderstood by their own families.

Muslims lesbians do not seem to have very much representation in YA books, or publishing in general. However, judging by most of the comments on your Goodreads page, there are many readers who are very eager for just that. I’d really like to hear any thoughts you might have on that.

I am so happy that there is so much support and anticipation for Rukhsana’s story. To be honest, I was a little wary of the response I would get for a story that deals with such culturally sensitive material. But I was elated to get messages from readers who said they were just like Rukhsana and that they couldn’t wait to read her story.

I’d love to talk a little bit about the themes in the book. Some of the themes that stood out for me are first love/loss (both in general and specific to LGBTQ teens), being stretched between worlds (this came up in a lot of different ways: culturally, religiously, generationally, geographically), staying true to oneself, intolerance, ignorance, allyship and forgiveness.

I think for me the most relevant theme is that of straddling cultures. Rukhsana lives in two worlds, both very different from each other and often at odds with each other. It’s something I’m painfully familiar with, both as an immigrant in my 20s and now as a mother. For Rukhsana, this is true on multiple levels. Because she is Muslim, South Asian and American she already exists at the intersection of all three identities. Being gay on top of that puts her at odds with her own family and religious community. She is often conflicted when it comes to making her friends understand that there are many different aspects to her identity and that she belongs in part to each one. She faces ignorance and intolerance both from her family and her friends for different reasons, but each makes her feel like an outsider.

There were some really tough subjects that you didn’t shy away from. In particular, the abuse that Rukhsana’s grandmother and mother suffer at the hands of her grandfather, and Sohail’s murder, as well as homophobia in general. Could you tell me a little bit about that and why it was important to include those aspects of the story?

Rukhsana’s grandmother was hard to write for me. But her suffering and experiences were important for me to include because they shaped who she was later in life. She was an ally for Rukhsana because of the awful things that happened to her. She understood the necessity to remain true to oneself because she had lost herself when she was young and suffered greatly for it. It was in great part from reading her account that Rukhsana realized how crucial it was for her to fight to be who she is.

Sohail’s murder was by far the hardest thing to write for me, but it was important because early on in the research process I read about three separate incidents where something heart-breakingly similar happened to Bangladeshi gay men in the past three or four years. It pained me deeply that something that heinous was happening in my country and I wanted to include that because it highlights the precariousness of Rukhsana’s situation in Bangladesh and also acts as proof for her American friends in Seattle that she is not being dramatic when she worries abut her parents finding out that she is gay. Of course it also acts as a catalyst for her parents’ realization that their actions and behaviour may have cost them their daughter.

On a lighter note, the food in this book could be a character unto itself (and I wanted to eat all of it). Could you tell me a little bit more about the food and the role it plays?

The food was my favorite character in this book! Of course the sights and fragrances do so much to connect us with the characters, but I also really wanted readers to get a feel for how much Rukhsana’s mother shows her love through cooking food. I myself love to cook and believe that food has a way of bringing people together. I also just wanted to write a character who likes to eat. And I have so many happy memories of growing up in Bangladesh that involve food that it would have been hard for me not to include it.

You’ve mentioned that you really want to convey the importance of this story to you as a South Asian, Muslim, immigrant mother. Why is this an important story in that regard?

As someone with a Pakistani mother and a Bangladeshi father I grew up feeling that I had to be two different people because of a regional/national identity conflict that I was too young to comprehend. When I married outside my faith I ended up never quite fitting in with any one group. That is why I identify so strongly with Rukhsana because I too had to struggle to find my footing and carve out a space for myself where I felt I could be myself. What I felt strongly while writing Rukhsana’s story was that while the reasons may be different, the inability to exist under one distinct label makes it very hard to feel comfortable in one’s own skin. You feel like you always have to apologize for one part of you or the other, and when you overcome that, then you can breathe and be at peace with yourself.