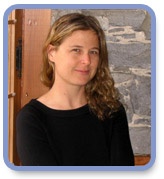 After spending four years working as an entertainment lawyer, Jaclyn Moriarty decided to write full time instead. Her first novel, Feeling Sorry for Celia was published to critical acclaim and won the Ethel Turner Prize in Sydney and was a Book Sense 76 selection in the United States. Her second novel, The Year of Secret Assignments, also received rave reviews.

Jaclyn grew up in a large family in Sydney, Australia. She studied English at the University of Sydney, and law at Yale and Cambridge.

She spent the last few years living in Montreal, Canada but recently moved home to Sydney so she could share her new baby Charlie with her family (and get some sun).