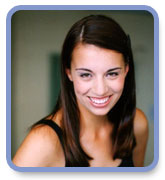 Adrienne Kress is a writer and actress born and raised in Toronto, Canada. It was only natural that Adrienne, the daughter of two high school English teachers, should fall in love with both creating and performing the written word.

Running parallel to her passion for acting was always her passion for writing. In high school, she won the Gordon C Johnson award for her work, and in university she studied with top Canadian playwright Djanet Sears. The play she wrote as a result of that experience, A Weekend in the Country, was performed at the Edinburgh Festival Fringe in 2004 and in Toronto at the Summerworks Theatre Festival in 2007, to excellent reviews and sold out houses.

Inspired by a trip to the town of Bath, Adrienne wrote Alex and the Ironic Gentleman while living in London, England. The sequel to the book, Timothy and the Dragon's Gate, has also been picked up by publishers around the world and was released in the United States, Canada and the UK and Commonwealth in early 2009.

Adrienne is presently living in Toronto where she is continuing her writing, acting and directing careers.