Young Sarah can't sleep following her grandpa's funeral. So she wakes up her dad in the middle of the night. He agrees to take her where Grandpa used to take him as a boy — to the lighthouse. On the way there, Sarah and her dad drink coffee and eat donuts — just as Grandpa would have liked. When they climb up to the top of the lighthouse, Sarah throws a flower out to sea in her grandpa's memory. Robert Munsch has crafted a heart-warming, tender story about honouring those who have passed and keeping their memory alive.

In 1993, after Robert Munsch was done telling stories at a theatre in Antigonish, Nova Scotia, he found a picture of a lighthouse lying on the stage. On the back it said, "Sarah Gillis, Antigonish."

He liked the picture a lot and he made up a story about it on the way to his next show. The story was about a kid going to a lighthouse after her grandfather's funeral.

Then Munsch called the library in Antigonish and asked if they could find a girl named Sarah who had given him a picture. He figured that she probably liked to use the library. Antigonish is a very small town, and it turned out that the librarian had a good idea who the kid was. She called up Miriam Gillis and said, "Is Patricia sometimes called Sarah?"

"Yes," said Mrs. Gillis. "Her name is Sarah Patricia." And when she asked her daughter if she had made Robert Munsch a picture, Patricia, who was also called Sarah, said, "Yes, I made one. I just left it 'cause I was too shy to give it to him."

So Munsch wrote to Patricia and her mom, and they wrote back. Her mom said that Patricia had been very close to her grandfather who had died a year before. This was very strange because Munsch did not know that Patricia's grandfather had died when he made up the story.

A long time later, Scholastic wanted to make this story into a book, so Munsch wrote to Patricia, who was in high school, and asked if she wanted to be the kid in the book.

The lighthouse in the book is Cape George Lighthouse, and the house is Patricia's grandparents' house on Cape Breton Island. 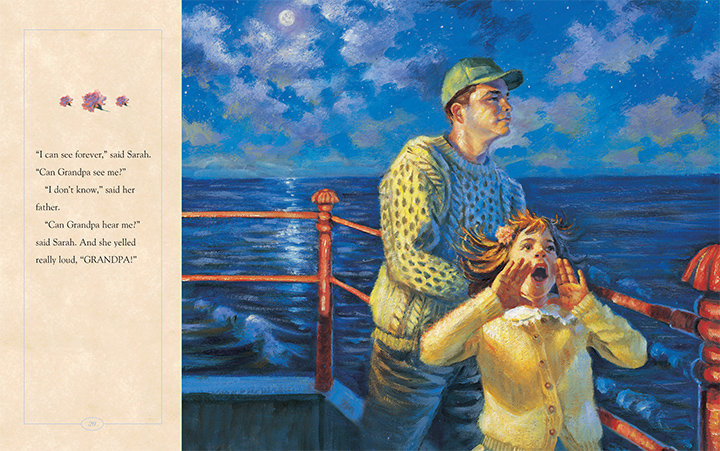