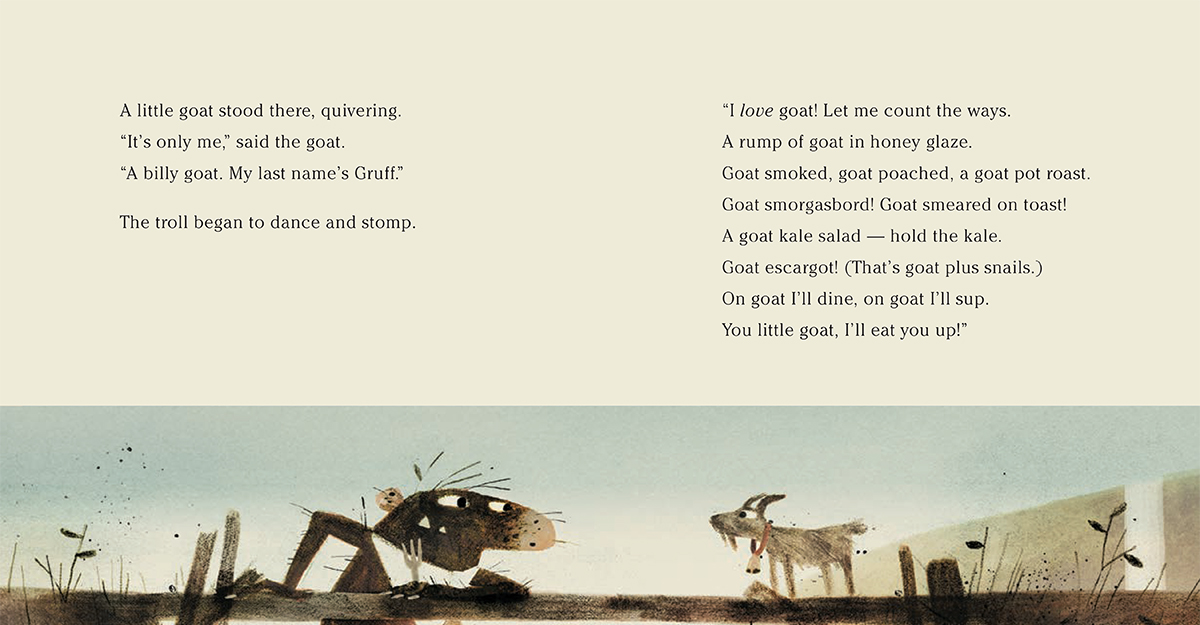 The MOMENTOUS debut of a groundbreaking Fairy Tale series — a brilliantly crafted, hilarious twist on this beloved classic, The Three Billy Goats Gruff.

Once upon a time, there was a little boy who loved fairy tales very much. Me, obviously. That little boy was me, Mac Barnett. I’ve always loved reading fairy tales. Now, I’ve written new versions of some of these old stories, and it makes me glad to share them with you.

The Three Billy Goats Gruff was first written down in Norway almost two hundred years ago, but people had been telling it out loud for a long while before that. Every time someone told the story, they changed it, at least a little bit, and sometimes a lot. Things got added, and things got taken out. At first this story didn’t have any pictures, because it wasn’t set down in a book, and, besides, picture books hadn’t been invented yet. (Some people might disagree with that, but I’m right.) This book does have pictures, and Jon Klassen drew them.

We hope you enjoy our version of The Three Billy Goats Gruff.


With a multitude of Caldecott Medals, Honors, international awards, and New York Times bestsellers to their names both independently and in collaboration, this is a creative pairing that is electric. So get ready to experience picture book magic . . . all you have to do is cross the bridge!

* "This inaugural offering in Scholastic's new fairy-tale series... sets the bar high and will be a favorite read-aloud among kids. Picture-book superstars Barnett and Klassen are known for their stellar collaborations, and their many fans will be waiting to snap this up." — Booklist, starred review

* "Barnett and Lowery bring the funny to the serious art of espionage in a perfect interplay of text and illustration . . . Barnett interweaves tidbits of global history fit for trivia lovers, while Lowery's comic-style images play a key role in the humor . . . Told with a sense of nostalgia for 1980s history and pop culture, the silliness and originality of this book will hook young readers." — School Library Journal, starred review

"Barnett opens his casebook again — this time to solve a classic locked-room mystery . . . Almost every page contains Lowery's illustrations, loosely drawn and garishly colored in green and orange, which give the whole affair a zany feel that is much enhanced by the narrative with its running gags. Kudos to a pint-size Poirot, pre-Mustache!" — Booklist

"Barnett and Lowery team up again in this second outing of international espionage mystery with royal overtones . . . this is a nifty mystery for young readers and a worthy sequel to the first." — Kirkus Reviews

"[Mac Barnett is] a great young writer of books for young people. If you haven't read his work, run somewhere and do that. Books for young people have a rich and I daresay limitless future — knock anyone who says otherwise into a ditch — and Mac has a central place within that limitless future. Don't bet against him or anyone like him." — Dave Eggers

"[In Barnett's books] there is no magic solution to any problem: The characters stumble through their dilemmas just as every one of us does. The world is a difficult yet good place, and there is no need for the typical rose-colored lenses that other children's books put on situations in order to fend off the bad stuff." — Yiyun Li

"He is a believer that picture books can have Swiftian absurdity and untidy endings, and that 'life is absurd, and kids know that.'" — The San Francisco Chronicle

Praise for The Wolf, the Duck, and the Mouse:

"Barnett and Klassen’s collaborations are always good for a laugh, and this one banks heavily on absurdity, to great effect. This original pourquoi tale will make a fantastic choice for storytimes, as kids will want to dance along with the duck and mouse — when they’re not rolling in the aisles, of course." — Booklist, starred review

* "Klassen’s palette is quiet, his weathered backdrops are elegant, and his comic timing is precisely synched to Barnett’s deadpan prose. Whereas the humor in Sam and Dave Dig a Hole was subtle and sly, this shape showdown is pure, antic buffoonery." — Publishers Weekly, starred review

Praise for Sam and Dave Dig a Hole:

* "When Sam and Dave dig a hole, readers get "something spectacular." The boys, on the other hand, do not. Their quest to find the spectacular brings them painfully and humorously close to buried jewels as they spade their way into the ground, accompanied by an intrepid canine companion." — Kirkus Reviews, starred review