Everything Awesome About Space and Other Galactic Facts! | Scholastic Canada
Our Books Everything Awesome About Space and Other Galactic Facts! 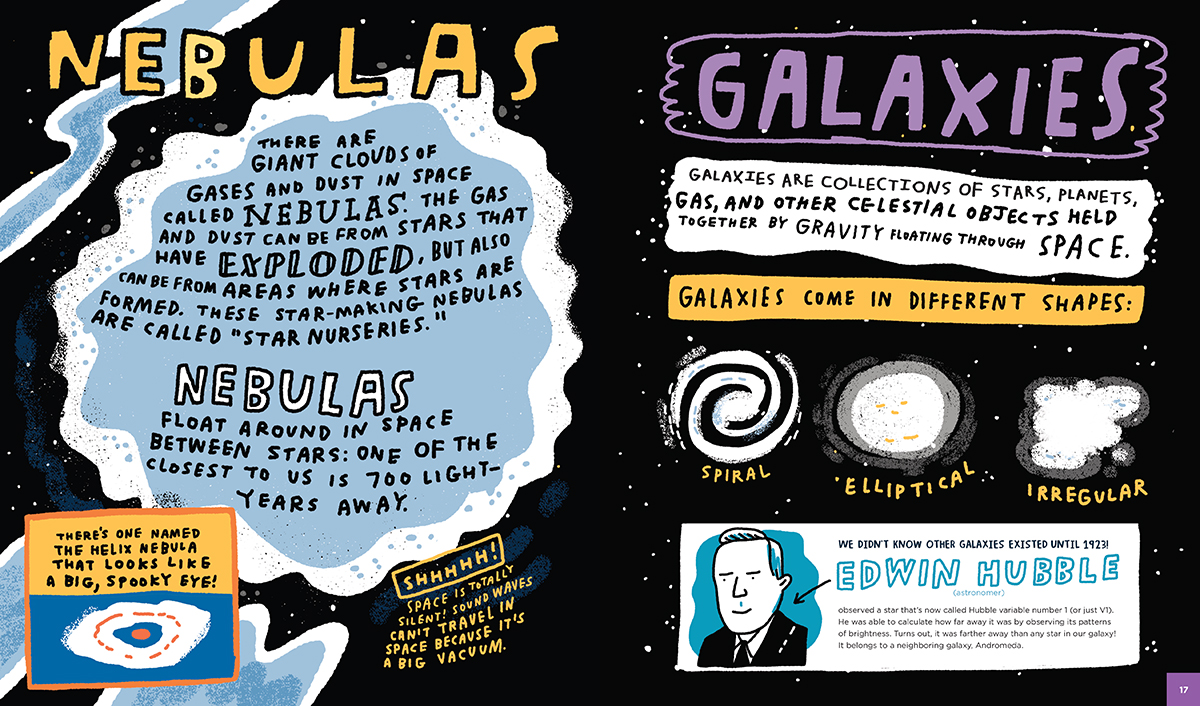 Everything Awesome About Space and Other Galactic Facts!

Blast off into outer space with this ultimate, 128-page book about everything you ever wanted to know about the universe, jam-packed with fun facts, jokes, comics, and more!

Did you know that the surface of the sun is hot enough to make diamonds boil? Or that one year on Neptune is 165 Earth years? Or that space is thought to smell like... burnt steak?? Find out all this and more, in this comprehensive, hilarious outer space adventure from Mike Lowery!

Perfect for fans of Dog Man who love nonfiction, this is the definitive, go-to book about everything AWESOME you EVER wanted to know about all things outer space Uncover a wealth of weird, wacky, and wild facts about our universe, from planets to supernovas to space travel and everything in-between, told in Mike Lowery's signature, acclaimed comic style with bright and energetic artwork, fresh framing devices, and hilarious jokes. This is the go-to book for space enthusiasts that kids will put in their backpacks and obsess over, bridging the gap between encyclopedic nonfiction content and lighter picture book fare, filling the need with a one-stop shop for the legions of 7-10 year olds who want to know absolutely everything there is to know about space.

This book joins Everything Awesome About Dinosaurs and Other Prehistoric Beasts and Everything Awesome About Sharks and Other Underwater Creatures in this groundbreaking nonfiction series, covering the topics that kids love with a fresh and one-of-a-kind graphic novel approach. Discover the must-have, out-of-this-world guide for space fanatics, a madcap field guide full of facts and humor, and learn everything you ever wanted to know about outer space!

Praise for Everything Awesome About Space and Other Galactic Facts:

"A charged-up roundup of astro-facts... a blast from first to last." -- Kirkus Reviews

Praise for Everything Awesome About Sharks and Other Underwater Creatures:

"In the wake of Everything Awesome About Dinosaurs and Other Prehistoric Beasts! (2019), Lowery spins out likewise frothy arrays of facts and observations about sharks, whales, giant squid, and smaller but no less extreme (or at least extremely interesting) sea life... An immersive dunk into a vast subject-and on course for shorter attention spans." -- Kirkus Reviews

Praise for Everything Awesome About Dinosaurs and Other Prehistoric Beasts:

* "Lowery sandwiches a populous parade of very simply drawn dinos between a history of prehistory and a roundup of diverse topics, from what paleontologists do to sets of dinosaur jokes and A Few Kinda Weird (and Unlikely!) Dino Extinction Theories... though true dinosaurs hold the spotlight, flying and marine reptiles, early mammals, and other fabulous early fauna take such frequent star turns that along with infobites galore, readers will come away with a fairly sound understanding of just how dinosaurs fit into the whole history of life on this planet... A manic but solid series kickoff." -- Kirkus Reviews, starred review