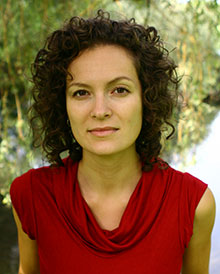 Ria always wanted to write and be a writer. “As a kid, I was horrible at math and good at writing, so I told my teacher I was going to be a journalist (I thought this just meant writing a personal journal and getting paid for it). I did everything I could to avoid doing math, so that might be partly why I got good at writing!” she explains.

It was her own rescue dog, Pender, that was partly the inspiration for Chilko, the dog hero in her first book, Nobody’s Dog. Pender was a shepherd-husky cross — although people often thought he was part wolf — and was a constant companion during the writing of the book. Ria says, “As the story unfolded, I realized Jakob had a lot to learn from Chilko, not only about dogs, but also about life. I went through the same process with Pender when I adopted him from a shelter. In the end, both Jakob and I are better people because of the relationships we’ve had with our dogs.”

Her second book, The Opposite of Geek, is young adult fiction that tackles the difficult issues of high school angst and heartache with a surprising hit of haiku, a style of poetry that Ria particularly likes. Her blog, which she co-writes with another author, has an interesting feature. For their Friday posts, they each put up a photo and invite readers to caption them with a haiku. The blog is an outlet for them to post about their shared obsessions of food and writing. Check it out at www.forkandfiction.com.

Ria is a graduate of the University of British Columbia’s Creative Writing MFA program. She has published fiction and poetry in literary journals and has won several poetry and creative writing prizes. She has also taught courses in fiction, poetry, literature and writing for children. Ria lives in Nanaimo, British Columbia, with her family.