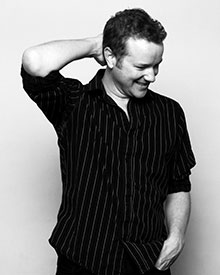 Watch a trailer for
Summer's End

A man of many talents, Joel A. Sutherland describes himself as “a cinephile, a dog-walking enthusiast, an avid traveller and a board game master.” But above all else, he loves to read and write.

Joel grew up in a house brimming with books. Reading was a daily and much-loved activity, and he began writing as soon as he could hold a crayon. His early tales of Bo, the baseball-playing German shepherd, are the stuff of family lore and would still be displayed on his mother’s fridge had he not rationalized that they had been there long enough. “The paper had started turning yellow,” he confesses.

As a grownup, Joel’s first novel Frozen Blood, was nominated for the Bram Stoker Award in 2008. His short fiction has appeared in numerous anthologies and magazines, including Blood Lite II & III and Cemetery Dance magazine, alongside the likes of Stephen King and Neil Gaiman. He is also the founder of the DarkLit Fest, a literary event that has welcomed Guests of Honour Kelley Armstrong and Joy Fielding, and is a two-time juror for the Canadian Children’s Book Centre’s John Spray Mystery Award.

Taking a break from horror, Joel’s first book for Scholastic was Be a Writing Superstar, which features writing tips and interviews with many of Canada’s most well-known authors and illustrators. Joel returned to his preoccupation with all things spooky in the award-winning Haunted Canada books. He is the author of Haunted Canada 4 to Haunted Canada 11. As research for the books, Joel voluntarily checked in to the Olde Angel Inn in Niagara-on-the-Lake in the hopes of determining if the rumours of ghost appearances had any basis in truth. Watch a video of his ordeal here to see how he fared! Joel is also the author of the fiction series Haunted and the stand-alone titles Summer's End and Screamers.

Aside from his many writing pursuits, Joel is a librarian with a special interest in children’s services, and holds a Masters in Library and Information Studies from Aberystwyth University in Wales. He supervises a group of teen library volunteers and is involved with children’s programs such as the TD Summer Reading Club and Battle of the Books, among others. His greatest professional satisfaction is getting the right kid’s books into the right kid’s hands. It could be that Joel’s appearance as "The Barbarian Librarian" on the Canadian edition of the hit television show Wipeout helped in this mission. But by making it all the way to the third round, he at least proved that “librarians can be just as tough and crazy as anyone else.”

Joel lives in southeastern Ontario with his family.