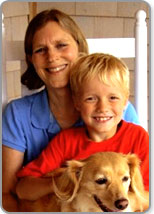 Ann Matthews Martin was born on August 12, 1955. She grew up in Princeton, New Jersey, with her parents and her younger sister, Jane. After graduating from Smith College, Ann became a teacher and then an editor of children's books. She's now a full-time writer.

Ann gets the ideas for her books from many different places. Some are based on personal experiences, while others are based on childhood memories and feelings. Many are written about contemporary problems or events. All of Ann's characters, even the members of the Baby-sitters Club, are made up. But many of her characters are based on real people. Sometimes Ann names her characters after people she knows, and other times she simply chooses names that she likes.

Ann has always enjoyed writing. Even before she was old enough to write, she would dictate stories to her mother to write down for her. Some of her favorite authors at that time were Lewis Carroll, P. L. Travers, Hugh Lofting, Astrid Lindgren, and Roald Dahl. They inspired her to become a writer herself.

Since ending the BSC series in 2000, Ann’s writing has concentrated on single novels, many of which are set in the 1960s.

After living in New York City for many years, Ann moved to the Hudson Valley in upstate New York where she now lives with her dog, Sadie, and her cats, Gussie, Willy and Woody. Her hobbies are reading, sewing, and needlework. Her favorite thing to do is to make clothes for children.