Everyone is late for the wedding and nothing is going right. But Jillian and her incredible, wonderful ribbon dress can fix almost anything; the groom's shoelaces, the bride's unruly hair, the guests' gift . . . she even helps keep the best man from losing the ring. But now Jillian's dress is a mess - who is going to fix it for her?

In 1993, Robert Munsch was in Montreal making a video. A boy and a girl came in very early to be in the audience, and nobody paid any attention to them. They stood in the middle of the huge TV studio looking lost, so he made up some new stories for them. One of the stories was about a ribbon dress that the little girl was wearing. Munsch had never seen a ribbon dress before.

The next day, Munsch decided that the ribbon story was too good to forget and wrote it down, but he couldn't remember the girl's name. The people at the TV studio said that maybe she was from the Mohawk reserve at Kahnawake, across the river from Montreal. So Munsch called around Kahnawake and tracked down Jillian. He also learned that there were lots of ribbon dresses at Kahnawake. To dress up really fancy, Mohawk girls wear ribbon dresses and Mohawk boys wear ribbon shirts.

Years later, when it looked like the story might become a book, Munsch went to Kahnawake to visit Jillian and her family. He took lots of pictures, which Eugenie Fernandes used to help her illustrate the book. After Ribbon Rescue was published in 1999, Munsch did a storytelling at Jillian's school. Lots of girls wore their ribbon dresses! In 2004, a local Mohawk edition of the story was published . In it Jillian is called Teiohathe, her real Mohawk name. 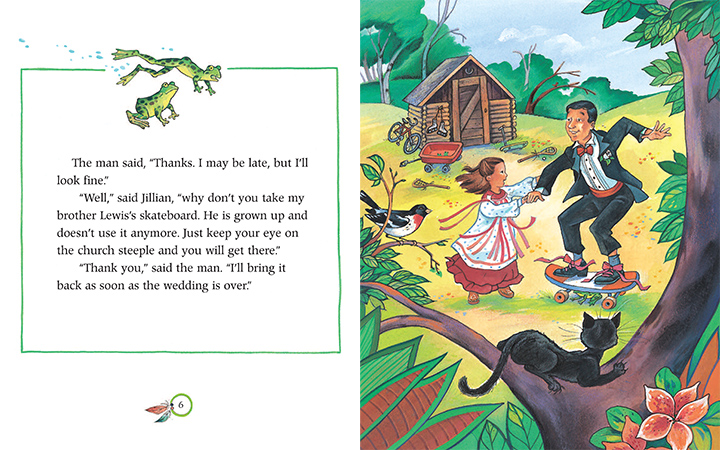