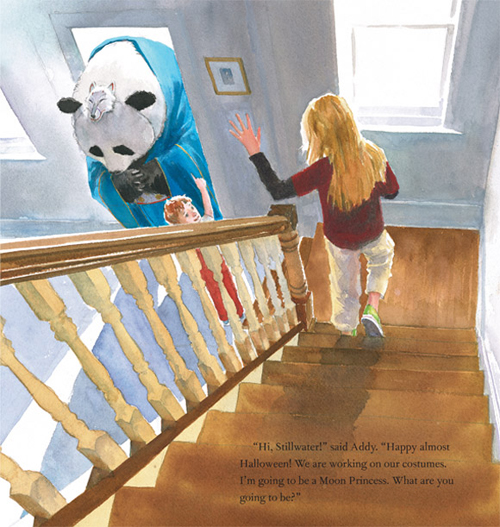 On Halloween, Stillwater the panda, who dons a spooky costume and mask, promises his friends Addy, Michael, and Karl a spine-tingling ghost story to be told by a mysterious storyteller.

The storyteller — who looks remarkably like Stillwater — tells the children an unforgettable ancient Zen story about a girl named Senjo who hopes to marry Ochu, the boy next door. But Senjo's parents have different plans for her future. They want her to marry a more prosperous man than Ochu — someone who will care for the family and her ailing father.

Heartbroken by the prospect of being separated, the two run off to a far away village and marry. As the years pass, Senjo's regret for having left her family slowly eats away at her happiness, and she and Ocho return home to make amends. But a surprise ending is in store. For Senjo's father swears his daughter has been sick and living at home with him the entire time. Yet Ocho knows differently, for he has been living with Senjo for many years. What is the truth? Who is the real Senjo?

The story of Senjo was originally written down by a Chinese Buddhist Monk Master named Wu-men Hui-hai in the early 13th Century. This type of story, called a Koan, is used by students of Zen to attain enlightenment. It provokes thought and conversation — yet has no concrete answers. With Zen Ghosts, Muth has once again presented an original, beautifully crafted story, perfect for Halloween — or any time.