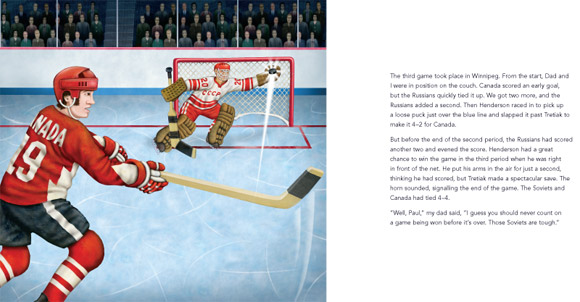 In this enduring father-son classic, now available from Scholastic, 10-year-old Paul has just joined the hockey team and loves to practice every day with his dad.

When Dad gets a promotion and can no longer play with him, Paul has to make do with watching the exciting Canada vs. Soviet Union series with him at night.

Paralleling the game-by-game, play-by-play, goal-by-goal excitement, Paul and his father rally through the series, until finally the tie-breaking final game arrives. It's a day of delight, revealing the unbelievable and the unexpected — a story that will set readers on the edge of their seats.