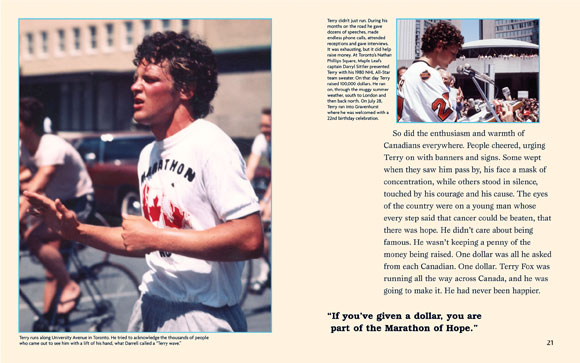 "Even if I don't finish, we need others to continue. It's got to keep going." -Terry Fox

Dozens of photographs and simple, evocative text combine to tell the story of Terry's life and legacy-how he grew up loving sports and competition, always determined to finish what he started; how he developed cancer and lost his leg; how he trained day after day, on one strong leg and a prosthetic limb, with the idea that he might try to run across Canada; how he managed to make it two-thirds of the way before cancer returned; and how by so doing, he inspired millions of people around the world and raised millions of dollars for cancer research.

The hardcover edition of this important book, created in cooperation with the Terry Fox Foundation and Terry's family, was the first authorized biography of Terry Fox ever written specifically for children. This new paperback edition includes eight new pages of information about Terry and his legacy.

Praise for Terry Fox: A Story of Hope

"Reissued to commemorate the 30th anniversary of Terry Fox's Marathon of Hope, and as a precursor to the 2010 Terry Fox Run, this book will inspire the children of the children who watched a great Canadian's valiant journey by foot from St. John's to Thunder Bay from April 12 to Sept. 1, 1980." -The Globe and Mail

"Through an insightful mix of visual elements and an easy-to-read, chronological story, Trottier shows Terry's development from an ordinary Canadian kid with optimistic tendencies to the determined, selfless young athlete who inspired millions to do their part for cancer research. Memorabilia, photos, and quotes displayed scrapbook-style add interest and support the text." -Quill & Quire

"A 'must-purchase' title for every elementary school in Canada. Highly Recommended." -CM Magazine

"Dozens of photographs (from the Fox family archives), pictures of artifacts, a map and the easy to read text make the story accessible to a wide range of readers... a great resource for teachers to use when generating a discussion about one of Canada's best known heroes." -Canadian Teacher Magazine