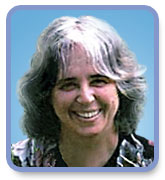 It seems like I've been writing since birth! I started writing poems before I got to school. I wrote the class musical in first grade — both words and music. It was about a bunch of vegetables who got together in a salad. I played the chief carrot!

While I was in junior high, I wrote an entire essay in rhyme about manufacturing in New York State. In high school, I won a Scholastic poetry contest. In college, I wrote newspaper articles and songs.

Then, on my 21st birthday, I sold my first book. It was a nonfiction book about women pirates— Pirates in Petticoats. After that, I was a book writer for good.

I've also been an editor, a teacher, a storyteller, a critic, a songwriter for rock groups and folk singers— as well as a mother and now a grandmother. I've been married for 35 years to Dr. David Stemple, who is the chairman of a university computer science department.

Despite this, I only started using a computer for writing a few year ago! Before then, I wrote on a typewriter, endlessly revising. My friends call it gem polishing. But I remember something the great poet John Ciardi once said— that a poem is never finished, just abandoned. I am that way with everything I write. I just keep going over and over and over until someone yanks it out of my hands! I've written more than 200 books.