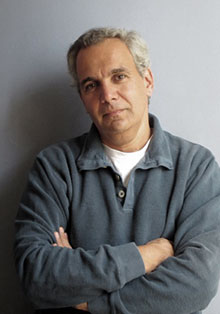 Q & A with author Emil Sher

Emil writes prose and plays for the young and the once-were-young. His first novel, Young Man with Camera, was published by Scholastic in Fall 2015 and has received numerous awards and honours. His board books, A Button Story and A Pebble Story, were listed among the Best Books for Kids & Teens 2015 by the Canadian Children’s Book Centre. Emil is a laureate of the 2014 K.M. Hunter Artist Award in Literature. His picture book Mittens to Share, illustrated by Irene Luxbacher, was published in 2016.

Emil has written the stage play adaptations of Hana’s Suitcase by Karen Levine and The Boy in the Moon by Ian Brown. Works-in-progress include the script and lyrics for a stage musical of Roch Carrier’s The Hockey Sweater and the script for The Book of Ashes, inspired by the true story of an Iraqi librarian who saved tens of thousands of books in the midst of war. The Book of Ashes premiered at the International Children’s Festival in St. Albert, Alberta, in spring 2016.