The Road to Afghanistan

A moving tribute to all the soldiers who have served with the Canadian Forces.

A young soldier just returned from Afghanistan has many memories: the beauty of the mountains and wildflowers, the colours of land and sky . . . but also the tragedy that war has brought to that ravaged country and those who fought there.

Memories shift to another soldier in the family — great-grandfather's years in the trenches during WWI, and then grandfather's tour of duty during WWII. The young soldier also remembers those who did not return alive, but travelled home along the Highway of Heroes, honoured by silent observers.

In this timely new book aimed at a younger audience than most, award-winning author and noted war historian Linda Granfield delivers a moving and honest portrayal of military service. Complemented by poignant, evocative artwork by acclaimed illustrator Brian Deines, this book is sure to provide insight and to inspire pride in families all across Canada. 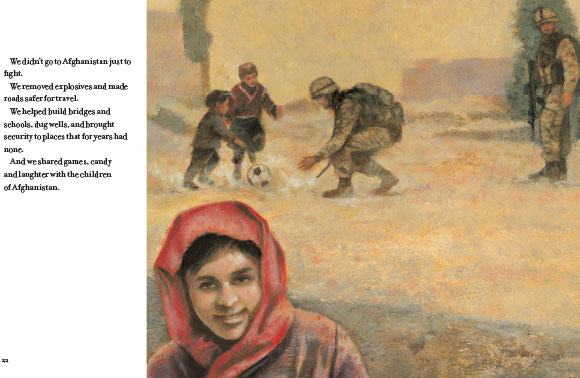 Praise for The Road to Afghanistan:

"A touching and direct story that resonates with personal understanding of what Canadians have done in Afghanistan." —The Right Honourable Adrienne Clarkson, Colonel-in-Chief, Princess Patricia's Canadian Light Infantry

"This book really highlights the reality of what many soldiers have gone through during their time in Afghanistan. [It] touched my heart and brought me right back to those hot sunny days in the desert so far away from home and family." —Master Corporal Christopher D. Russell, Canadian Forces Military Police