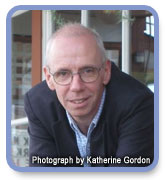 When I present in schools, I’m often asked: "Have you always wanted to be an author?" The simple answer is no, I was 43 when my first book was published, but I qualify my answer by saying that I have been an author as long as I can remember.

I was a lonely child and I compensated by making up stories — with me as the central character — based on what had happened at school that day, something I had read or a movie I had seen. I never wrote any of these stories down and I don't remember any of them, but that's all I do today. The only difference is that I now write these stories on my computer and turn them into books.

I was born in Edinburgh, Scotland, but I grew up on the Isle of Skye (I could speak some Gaelic when I was four), and in Paisley, outside Glasgow. I disliked high school and only applied myself when someone said I couldn't do something. Fortunately, one time I was in the principal's office for some forgotten reason and he said I was too dumb to go to university. That annoyed me and I was determined to prove him wrong. I went to St. Andrews University and did an Honours Degree in Geology. I worked in Zimbabwe, but there was a war on, so I came to Alberta and worked in Edmonton for ten years. I started freelance writing in 1989 and moved out to Vancouver Island in 1991 to write full time.

I love history — it inspires everything I write. Every one of my more than 30 award-winning books — from stories about dinosaurs to boys caught up in the Second World War — deals with the past. I firmly believe that the decisions a Roman Legionary, a boy caught up in the Spanish Civil War, or a starving Arctic explorer had to make were just as confusing and frightening as any of the decisions we have to make today.

My particular interests are in war and how young people, trapped in events they can only barely comprehend, have dealt with the horrors of conflict on a local and global scale. Teachers like my books because they appeal to boys and get them reading, but girls aren't immune to death-defying escapades and I write for anyone who enjoys excitement and adventure in their reading material.

I Am Canada: Graves of Ice, Commended, Resource Links, Best of the Year, 2014

I Am Canada: Shot at Dawn, Short-listed, Geoffrey Bilson Award for Historical Fiction for Young People, 2012