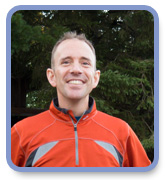 “I guess it’s true what they say.  Once you’ve run 100 miles in a day, the word ’impossible” loses its meaning.”

David Carroll has always been a writer of one stripe or another. At CBC Radio, he's written and produced countless shows including Canada Reads, and CBC's weekly variety show, GO with Brent Bambury. He is also a regular contributor to Canadian Running magazine. He has been lucky enough to interview some major creative talents, including Maurice Sendak, Phillip Pullman and Gordon Lightfoot, among others. But the one thing that David is even more passionate about than writing — is running! In an average week, he runs between 80 and 125 kilometres.

He’s run in all ten Canadian provinces and three territories and in the Pyrenees in France. “I dream of running in England’s Lakes District, and I have a hankering to sprint across the floor of the Grand Canyon. My most immediate goal, however, is to run the 885 km Bruce Trail, end-to-end, in one go,” claims David.

Is this possible for someone who hated running when as a kid? “I had no idea back then that running could actually be fun,” David admits. “I wouldn’t have believed that one day I’d be able to run for 24 hours straight.  And I’d have thrown a running shoe at you if you’d suggested that the culmination of one dream — successfully completing a 100-mile race — would lead to the realization of another life-long goal: publishing an actual novel.”  Yet all this truly happened for him.

David wasn’t much of an athlete as a kid. His eyesight was bad, and he had terrible hand-eye coordination. When it came to gym class, and it was time to pick sports teams, he was radioactive. So even though he loved being outside and being active, David dropped gym as soon as he could. For two decades he wasn’t particularly active. He commuted to work on his bike, and hit the gym from time to time. But that was about it.

Then one day he started running. He liked it. A friend suggested he enter a marathon, so he did.  He trained hard, and finished successfully. He ran more marathons. He got faster. He finished the Toronto marathon in three hours and four minutes — which was fast enough to qualify for the Boston marathon. But then, there was another challenge that beckoned.

One hundred miles is roughly the distance from Toronto to London, Ontario; from Montreal to Ottawa; or from Vancouver to Whistler. In a car, on a highway, it would take about 90 minutes to drive 100 miles.  On foot, it takes much longer. It typically takes David about 22 hours to run 100 miles. But he doesn’t run that distance on a road, or a running track.  He runs up and down hills and mountains, on rugged dirt trails through a forest, all day and night. He is what’s called an “ultra-runner.” It’s an obscure but growing sport, and it’s not for the faint of heart. “Be prepared to experience blisters, chafing, hallucinations, wild animals and the risk of respiratory and kidney failure,” cautions David. He has run a dozen or so of these ultra-marathons to date.

It was his nephew Quinn (one of 34 nieces and nephews David is proud to be uncle to) who inadvertently started David on the path to writing his first novel. Quinn had shown a great fascination in his running and training. “So I started to make up wild stories about what had happened to me while I was training in the woods. Eventually those stories grew into the book Ultra.”

His latest book is Sight Unseen. Find out more about David on his website: www.writerunrepeat.com.