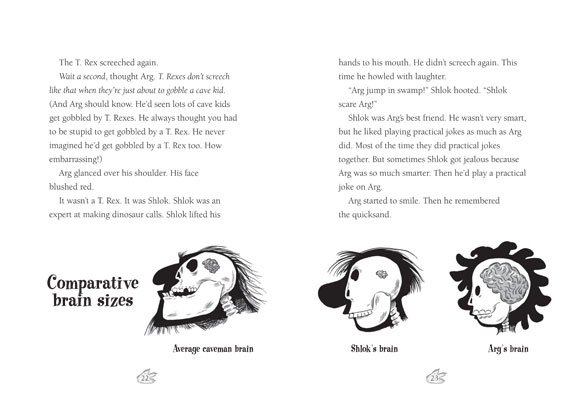 For Arg, a boy of high intelligence living in the Stone Age, being smarter than everyone in his Neanderthal tribe makes it hard to fit in. Rather than grunt, he speaks articulately, and rather than run around naked, he wants to wear clothes.

When it seems that no one will ever understand him, he meets Skeet, an equally evolved, talking T-Rex. At last he has met his intellectual equal, but he is alarmed when he learns of Skeet's concerns about the dwindling population of dinosaurs. They decide to join forces and embark on a mission to save dinosaurs from extinction. But will the stubborn and simple nature of both their species thwart their efforts?

Packed with danger and suspense, and illustrations on every page, this new series promises to hook readers and take them on a rollicking pre-historic adventure!