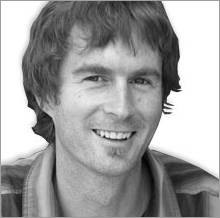 I was born in Ottawa in 1968. I grew up in a little house on a quiet cul de sac, surrounded by my gang of neighbourhood pals. My best friend and I had big plans for when we grew up. We were going to be construction workers and live together in a motor home. Well, that didn't happen, but lots of other stuff did.

I've loved drawing for as long as I can remember. When I was in school, I drew on anything and everything. Notebooks, binders, tests, my desk. If I could reach it with a pencil, I put a spaceship on it. I guess over the years all those spaceships added up to a lot of practice. By the time I grew up, I was handy enough with a pencil to try my hand at working as an artist (but not before I'd tried just about every other job on the planet!)

My first full time art job was as an animator for a kids' science web site. I remember feeling like I must be the luckiest guy on earth - I was getting paid to draw pictures. And guess what. I even got to draw spaceships!

After working on the internet for a few years, I moved on to the weird world of film and television. Did you know that when you watch a character on TV use a computer, what you see on the character's computer screen is almost always fake? Real computer programs can't be used on camera, so what you actually see is just animation made to look like the real thing. Well, my job was to create that animation. Over the years I've made fake versions of everything from e-mail to web sites to navigation systems for, you guessed it, spaceships.

So how did I end up writing and illustrating picture books? I guess it started when an old friend from that gang of neighbourhood pals I grew up with came to dinner one night. She saw that I'd written and illustrated a story to give to my two daughters as a gift. She suggested I write another one and send it to a publisher to see if they'd like to make it into a book. I had a few story ideas, but the one I decided to write about was my favourite. I liked it because it was partly true. It was the story of my daughter, Haley, and her best friend, Bix, who really were separated for a year when Bix went to Italy.

Well, I sent that story in to Scholastic, and, lucky me again, they made my story into a book. Since then I've written a second Haley and Bix story, and I'm working on a third. I hope you enjoy reading them as much as I enjoy writing them!