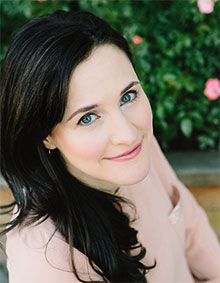 Sarah Mlynowski is the New York Times bestselling author of the Whatever After series.
Sarah was born in Montreal, Canada. After graduating with a degree in English literature from McGill University, she moved to Toronto to work for Harlequin Enterprises. Yup... the romance publisher! While she never met Fabio, she used her romance publishing experiences to fuel her first adult novel.

Since then, Sarah has written additional novels for adults; as well as the Magic in Manhattan series, Gimme A Call, Ten Things We Did (And Probably Shouldn't Have) and Don’t Even Think About It for teens.

Sarah's books have been translated into twenty-nine languages and optioned to Hollywood. She now lives in New York City with her husband and two fairy-tale loving daughters. She can be found at www.sarahm.com or pretty much everywhere.

Where Sarah got the idea for Whatever After:

As a kid, Sarah had two favorite kinds of bedtime stories. The first kind were about a little girl named Sarah who lived in Montreal, just like she did, but magic stuff happened to her, like she had a magic umbrella and could fly, or a magic fork that could turn vegetables into chocolate. The second were fractured fairy tales. Since she was not a fan of vegetables, when her mom told her the story of "The Princess and the Pea," the queen put Smarties under the girl's mattress to see if she was a true princess. When Sarah became a writer she wondered: What if she combined the two? What if a regular girl magically fell into a fairy tale and fractured it? And that's how she got the idea for her series, Whatever After.